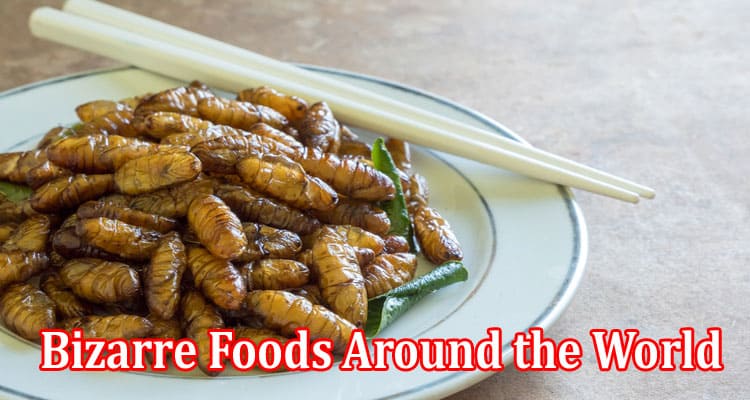 Bizarre foods can be found in almost every corner of the world, and they often reflect the local culture, history, and traditions of a particular place. From fermented shark meat in Iceland to deep-fried tarantulas in Cambodia, here are 10 bizarre foods from around the world that might seem strange like the food people ate in the 1940s. Check out these weird WW2 recipes that are considered delicacies to others.

Fried tarantulas are a popular snack in Cambodia, particularly in the town of Skuon. They are typically seasoned with garlic and salt before being deep-fried in oil. According to locals, the tarantulas have a crunchy texture on the outside and a soft, almost cheese-like consistency on the inside. They are said to taste a bit like chicken, but with a slightly bitter aftertaste. Some people even believe that eating tarantulas have medicinal properties and can cure ailments such as asthma and high blood pressure.

Balut is a fertilized duck egg that is boiled and eaten in the shell. The egg is incubated for about 17 to 21 days, at which point the embryo is partially developed and still has feathers, bones, and organs. It is typically seasoned with spices and vinegar before being eaten. While the texture and flavor may be an acquired taste for some, balut is considered a delicacy in the Philippines and is often sold as a street food.

Hákarl is a traditional dish in Iceland made from fermented shark meat. The shark is typically a Greenland shark or a basking shark, both of which are poisonous when fresh due to high levels of ammonia and trimethylamine oxide. To prepare the dish, the shark is beheaded and gutted, and the meat is then buried in the ground for several months to ferment. After the fermentation process is complete, the meat is cut into small pieces and hung to dry for several more months. Hákarl has a strong, pungent smell and a fishy taste, and it is usually served as a snack with a shot of Icelandic schnapps.

Fried silkworms are a popular snack in South Korea, particularly in the city of Daegu. They are typically seasoned with chili sauce and garlic before being deep-fried in oil. The silkworms have a crunchy texture and are said to have a slightly nutty flavor. Some people believe that eating silkworms can have medicinal properties, such as improving skin and hair health.

Fried caterpillars are a popular snack in Zambia, particularly in the capital city of Lusaka. They are typically harvested from the mopane tree and are seasoned with salt and chili before being deep-fried in oil. The caterpillars have a crunchy texture and are said to have a nutty, slightly bitter flavor. They are a valuable source of protein for many people in Zambia and are often eaten as a snack or used as a topping for traditional dishes.

Fried grasshoppers are a popular snack in Thailand, particularly in the northeastern region of the country. They are typically seasoned with chili and lime before being deep-fried in oil. The grasshoppers have a crunchy texture and are said to have a slightly nutty flavor. They are a valuable source of protein and are often eaten as a snack or used as a topping for salads and other dishes.

Fried beetles are a popular snack in Japan, particularly in the city of Kumamoto. They are typically seasoned with soy sauce and sugar before being deep-fried in oil. The beetles have a crunchy texture and are said to have a slightly sweet, nutty flavor. They are a valuable source of protein and are often eaten as a snack or used as a topping for rice dishes.

Fried termites are a popular snack in Ghana, particularly in the eastern region of the country. They are typically harvested from termite mounds and are seasoned with salt and pepper before being

Casu marzu is a type of cheese made in Sardinia, Italy, that is left to ferment with the help of cheese flies. The flies lay their eggs inside the cheese, which hatch and release maggots that eat the cheese, breaking down the fats and proteins. As the maggots consume the cheese, they produce an enzyme that makes it softer and gooier. The cheese is then eaten, maggots and all. Casu marzu is banned in some countries due to health concerns, but it is still considered a delicacy in Sardinia.

Fried guinea pig, also known as cuy chactado, is a popular dish in Peru and other parts of South America. The guinea pig is usually fried in oil until it is crisp and served with a variety of vegetables and sauces. It is said to have a tender, gamey flavor and is often served on special occasions.