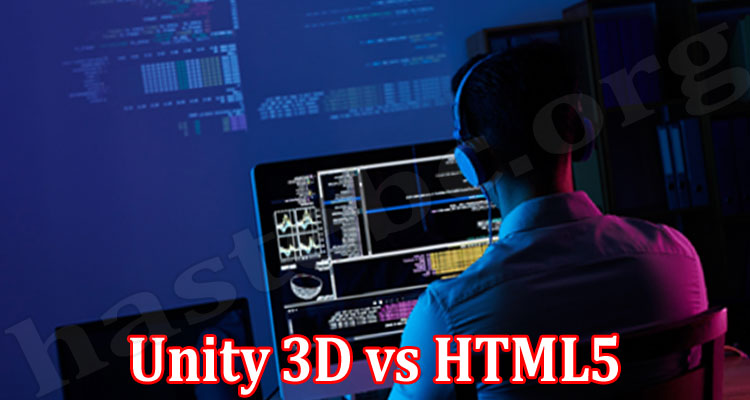 Smartphone games are becoming more and more common; no matter how big or tiny, people play them for entertainment or to learn new things. Game engines advanced as mobile games gained more and more popularity.

Game Development platforms for creating video games might be code-based, drag-and-drop, or hybrid. It can be difficult to select just one tool from the many game engines available for game production.

The totality of the game depends on the tools and technologies used to create it, thus this obstacle must be met head-on. The tools that will be used to create the game will have a significant impact on the aesthetics, performance, assets, and everything else. Therefore, you must choose the technology for your mobile game before game creation begins.

Unity 3D and HTML5 are two of the most well-known technologies in Game Development, and it has been noted that many individuals struggle to choose between the two. Therefore, we have written this post to settle this argument and offer a suitable prescription for the technology you ought to pick.

The language known as HTML5 (Hyper Text Markup Language) is used to create and distribute content on the Internet. Due to the ease with which these games can be played on a variety of devices utilizing a web browser, HTML5 is now frequently utilized to create games. Since the games created using HTML5 are cross-platform, users can target a wide audience with them.

With HTML5, practically all online tasks may be completed without the need for extra software like browser plugins. It can be used to create animations, programs, music, videos, and even sophisticated browser-based applications.

There is also no need to pay royalties because HTML5 is not a proprietary standard. Since HTML 5 Game Development apps are cross-platform, they may be used on desktop computers, tablets, and smartphones. In other words, it should function flawlessly if your device’s browser supports HTML5.

What is Unity 3D?

Unity 3D, an open-source, cross-platform game creation engine created by Unity Technologies, is used to create 2D, 3D, VR, and AR games. It is a well-known game development engine and is regarded as one of the top ones. Nearly any type of game may be created with the versatile Unity 3D Engine.

In June 2005, creators Nicholas Francis, Joachim Ante, and David Helgason published Unity 1.0, the first iteration of what would grow to be one of the most popular gaming engines.

The engine has been downloaded over 33 billion times in the past year alone. It supports over 25 platforms, including the well-known iOS, PlayStation 4, Windows Mixed Reality, and Android TV. Developers may create games with photorealistic elements and cinematic animations using Unity 3D.

We’ll contrast Unity vs HTML5 at various stages of the game production process for the actual comparison. In order to give you the most comprehensive and detailed comparison between the two, we will emphasise the advantages and disadvantages of Unity and HTML 5 Game Development at various stages.

The many phases of game development are:

It’s simple to set up and self-contained to use Unity 3D. Moreover, it includes everything required for game production and is a one-click solution.

However, there are certain drawbacks in opting for Unity 3D such as it is governed by a single organization and is not an open-source game development engine. If a bug is discovered by the developers while they are working on a project, they must wait until the company fixes it. The new upgrade may potentially break any workarounds that have already been created.

One of the simplest setups for web developers is HTML5. It does not require local code setup or IDE requirements for functioning. However. for those who are unfamiliar with HTML5, the setup might be very difficult and time-consuming. An HTML5 game must be set up and developed on a local server. Since there are numerous framework options to select from, it becomes a difficult challenge for developers to create a game that supports HTML5.

Unity 3D makes it easier and quicker to create a variety of games. It is the ideal engine for creating intricate games with stunning graphics. The programming process is streamlined by several helpful features like built-in physics, component construction, and preview debugging. Having many libraries makes development easier.

The major drawback is that the game logic becomes more complex if the C# language is utilized, and script-based coding does not provide a lot of reusable code libraries.

Unity will impede the development process of developers that prefer to do everything their way because it has a set way or process that must be followed. Utilizing Unity 3D for game development sometimes turns out to be more expensive.

With HTML5, cross-platform game development is simple. For creating casual games, HTML5 is fantastic. Based on JavaScript, HTML5 is a reasonably simple language to understand and use. Developers have access to the cross-JavaScript compilers for TypeScript and CoffeeScript. Games made with HTML5 can be created at a reasonable price.

Complex video games should not be created with HTML5. It doesn’t include a sizable game development library and only integrates a few tools. Selecting the right framework is challenging, and developers frequently don’t know where to begin. There are a number of HTML5 frameworks that are incomplete or under development.

One-click publishing is a Unity functionality. It facilitates the creation and distribution of cross-platform video games for web, console, PC, and mobile platforms. Moreover, the games developed with Unity run well on all devices.

Reaching more consumers with Unity games is quite expensive due to the hefty cost of publishing the game on each platform. There is a dearth of support for mobile and web browsers. Additionally, a plugin is necessary for web playback.

Since HTML5 is web-based, it is simple to publish games online. The games may be published without a plug-in, which makes them perfect for mobile and web browsers.

Despite the benefits, It’s quite stressful to use HTML5 for offline publishing. There is no one-click publish option available.

It doesn’t matter what technology you use to create games; what matters is that it’s the proper technology for your project.

The game production technologies Unity 3D and HTML5 are both efficient in terms of cost and performance. In general, HTML5 can be the best option for you if your game is straightforward and calls for fewer intricate features and gameplay.

Unity 3D may be a better option for you if your game is complex with a variety of top-notch features, stunning graphics, and intricate gameplay.